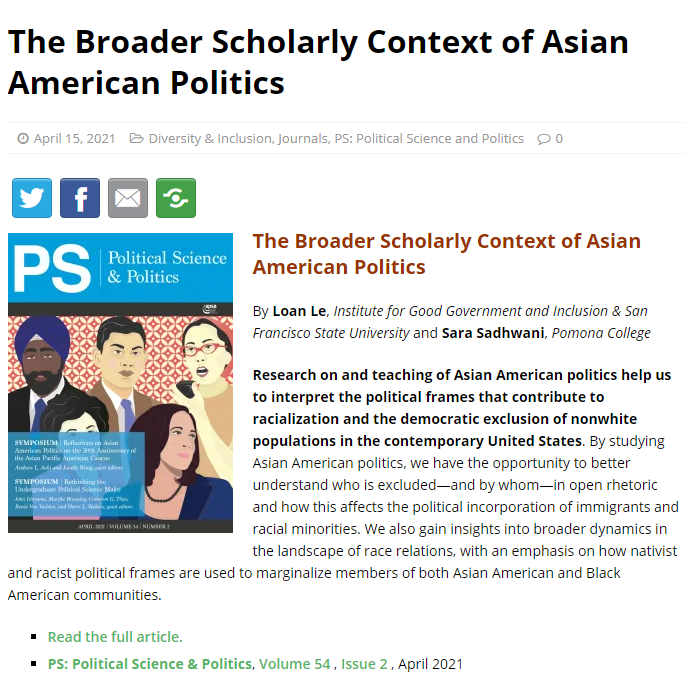 Dr. Le recently co-authored an article on “The Broader Scholarly Context of Asian American Politics” in the journal PS: Political Science & Politics, which considers commonality and the need for Asian American and Black American solidarity inside and outside of the academy.

Excerpts from the article:

“In July 2019, Professor Mae Ngai from Columbia University was quoted in the Los Angeles Times: “I’m a Chinese American. I grew up hearing this on a playground: ‘Ching chong, go back to where you came from…. Excuse me for being so frustrated, but there’s not a lot to parse here. This is just racism’” (Pearce et al. 2019). Research and teaching about
Asian American politics bolster rigorous thinking that can critique historical and contemporary frameworks that shape attitudes and policies related to racism, discrimination, and minority groups.

Why is it racist to tell a group of naturalized citizens, for example, that they are not American and should go back to where they came from?

It is racist because doing so encourages exclusion of a category of people who have full rights to citizenship and equal protection under the law. Asian Americans are disproportionately foreign born, with more than half of our group consisting of first-generation Americans. A broad assault on naturalized citizens as less American, then, is a way to denigrate Asian Americans as a group.

Nativism and racism marginalize minorities in everyday experiences, but their use in the mobilization of extremist ideologies, such as violent white supremacy, presents further risks to our democracy.

Research on Asian American politics examines divergence on issues based on ethnicity because Asian America is composed of many ethnic groups and heterogeneous languages, as well as varied political, social, economic, and cultural patterns. Other research notes gender differences in political behaviors (Filler and Lien 2016). Despite this heterogeneity, Asian Americans are lumped together, “racially triangulated,” and treated as different because of the “forever foreigner” stereotype (Kim 1999). We see the most recent example of this in 2020, with racism, discrimination, and hate crimes against Asian Americans on the rise after COVID-19 was identified as originating in Wuhan, China (Chow 2020; Mullis and Glenn 2020). The Anti-Defamation League found that white supremacists on social media were using the coronavirus to recruit followers to attack minorities (Perrigo 2020). Hence, Asian Americans must continue to build Asian American panethnicity and stand unified against ongoing racism, discrimination, violence, and other illegal activity, with special attention to hate crimes.”

“Research on Asian American public opinion highlights a positive association between support for Black Lives Matter and a sense of linked fate with Asian Americans and other minority groups (Merseth 2018). If minorities are rarely good enough, despite the fact that they are loyal Americans who pledge allegiance to our bedrock constitutional principles, then we must acknowledge that too many are being treated as second-class citizens.

This has been the long-standing case for both Asian American and Black American communities.

Asian Americans often are perceived as foreign despite citizenship and years in the United States. Black Americans may be excluded less frequently due to perceptions of the “foreign,” but they face discrimination based on anti-Black sentiment and other biased attitudes over time (Kim 1999).

By evaluating political rhetoric for nativism and racism (as well as other elements; e.g., biases against gender and sexual orientation), we can unpack and disarm political frames that manipulate group conflict and undermine democratic inclusion.

There is much work to be done. In an era of some prosperity, some progress, myriad challenges, and also oppression, we know that good work on race and ethnicity could have an important role in public policy discussions. If we do believe in equal protection, then we should strive to teach students and faculty colleagues about historical and contemporary Asian American politics, which encompass myriad issues and historical moments that are largely absent in textbooks on American politics (Aoki and Takeda 2008; Takeda 2015). We also have the ability to serve as role models for students in real life, above and beyond our research and writing.

We should have the courage and wisdom to behave consistently in accordance with the inclusive principles that we teach.

Beyond scholarship, college professors who inhabit the “ivory tower” primarily may be reticent to get involved in problems facing the institution that employs them. Regardless of administration or partisanship, however, our reluctance to report either violations or poor enforcement of Americans’ rights contributes substantially to why violations of basic human rights continue on and off campus to this day. With more people speaking up, perhaps we can do better than letting others control the dialogue such that extremist behavior or failures in equal protection are normalized.”