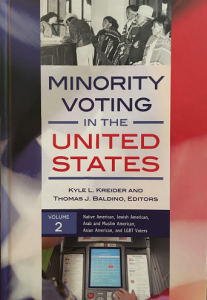 Cover of Minority Voting in the United States (2016), 2nd volume. Edited by Kreider and Baldino and published by Praeger.

Loan Le & Phi Su’s manuscript on electoral participation patterns across waves of Vietnamese American immigrants has been published. Given the contemporary controversy over the long-term incorporation of new refugee groups in the United States, examining the experiences of previous groups may provide an interesting point of comparison for scholars and policymakers, acknowledging that variation in ethnic groups and concerns about human security animate the current policy debate in distinct ways.

In the chapter, “Vietnamese Americans and Electoral Participation,” Le and Su “distinguished socialization processes due to unique experiences during a critical imprinting experience among Vietnamese immigrants from an explanation that relies on duration of time spent in the United States. Immigrant cohorts, as instantiated in waves of immigration, are of course related to years spent in the destination country, but we argue for in-depth analysis of immigrant cohorts above and beyond duration of time in the United States” (Le and Su 2016: 365).

“These findings support the idea that there are substantive within-group differences among Vietnamese Americans and that the classical linear assimilation hypothesis does not adequately explain political incorporation. Although naturalization does appear to increase steadily over time, with earlier waves more likely to have acquired citizenship, the same pattern of associations does not appear for our analysis of registration and voting. Notably, it was the third wave of Vietnamese immigrants who were most likely to cast ballots in the last presidential election” (pp. 362).

This chapter comprises one among others produced by  a group of scholars on minority voting in the United States, each of whom independently contributed much-needed expert analysis of electoral participation to a two-volume publication on electoral participation among African American, Women and Latino/Latina Voters (Volume I) and Native American, Jewish American, Arab and Muslim American, Asian American and LGBT Voters (Volume II).