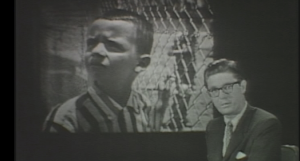 Photo credit: Cropped image from a video clip on the Plight of Pepito (a young Cuban American refugee, as shown in WTVJ Miami tv program and preserved by the Florida State Archives at floridamemory.com) . Film Description:  ” This film is a WTVJ (Miami) TV program called ‘For Your Information.’ It begins with a young Cuban refugee, Pepito, and follows his story. There are sequences of refugees on rafts and small boats arriving on the Havana-Palm Beach ferry, small airplanes and passenger airlines. Viewers see the processing of refugees at Public Health Service, where families are reunited” (Link to film). Although the video portrays the experience of early Cuban American refugees, we don’t know much about how they compare with later cohorts.

“An Examination of the Immigrant Cohort Hypothesis with Cuban American and Vietnamese American Immigrant Political Incorporation.”

This paper was delivered by Dr. Le at the Western Political Science Association’s annual meeting on March 25, 2016.

In this manuscript, we continue a test of our immigrant cohort hypothesis—that the combination of exit and reception experiences from a country of origin to a country of reception provides an important political imprinting experience for unique immigrant cohorts. Specifically, we focus on the effects of developing ethnic communities on outcomes of naturalization, voter registration, and turnout.
The analysis extends over five presidential election years and highlights that some short-term forces are at play in every election and that immigrant waves may react to these forces distinctively from one another depending upon the election cycle. Still, the longer term pattern over the five election years suggests that as the Vietnamese ethnic community has grown and become more established, later waves benefit most from available political resources as reflected in relatively high rates of incorporation. For Cuban Americans, although later waves were disadvantaged in 1996 (OR -.22, p<.001) and in 2000 (-.48, p<.001), the greater propensity for first wave Cuban Americans to participate relative to later waves evaporated. Later waves were more likely to vote in 2004 (1.34, p<.001) and in 2008 (OR 2.53, p<.001), although there was no statistical difference in 2012 across immigrant waves.