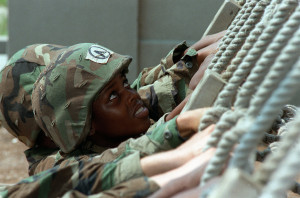 “A 4th Battalion recruit prepares to climb a cargo net to the top of the rappelling tower. The 4th Battalion is the only all female unit in the Marine Corps.” photo credit: DM-SC-93-00393 via photopin (license)

Members of our armed forces dedicate their lives to serving our country and they deserve praise for their honorable conduct and sacrifices. They should feel safe on and off the battlefield — and yet, ongoing issues with sexual harassment and assault continue to confront our nation’s best and brightest. IGGI launches a new project to evaluate current trends in sexual harassment and assault in our military and to make recommendations that will contribute to a safer environment for our service members.

In order to assess trends in reports and investigations, accurate data are needed for review by Department of Defense (DoD) leadership and Congress. The most recent Semi-Annual Report from the DoD’s Office of the Inspector General underscores that our military faces ongoing challenges with accurate information collection in this domain. Although resources are in place through various sexual harassment response programs and they are responsible for accurate information collection, data entered are incomplete, inconsistent and slow to be reconciled. However, the “USAAA [US Army Audit Agency] determined that the four subordinate commands reviewed did not enter complete and accurate sexual harassment complaints”.[i]

DoD IG recommendations include (1) Develop an interim policy that defines data requirements for formal and informal sexual harassment and assault complaints and codify the policy in Army Sexual Harassment/Assault Response and Prevention Program [SHARP] guidance. (2) Revise system user training. (3) Sexual Assault Review Board mandatory agenda review of all sexual harassment disclosures. (4) Develop reconciliation guidance for prompt correction of errors and review of all errors by the Sexual Assault Review Board as a mandatory agenda item.[ii]

One of the striking issues facing our service members is that serial offenders are not apprehended earlier. For instance, the Semi Annual Report summarizes:

(1) A Navy Petty Officer was identified as a serial rapist. The Naval Criminal Investigative Service (NCIS) investigated in July of 2014 after a female sailor reported she had been raped. The perpetrator, Navy Petty Officer Rashad D. Long, was determined by NCIS to having sexually assaulted a total of six women.  Long was told to have no contact with the victims but he violated the order and sexually harassed one of them. RESOLUTION: Long was sentenced to 19 years of confinement, a dishonorable discharge and was required to forfeit all pay after pleading guilty to rape, attempted rape and violation of a lawful order on March 5, 2015.

(2) The Air Force Office of Special Investigations working with the Great Falls Police Department found that between August 2013 and October 2014, Staff Sergeant Dorian Owens had raped or attempted to rape three victims. RESOLUTION: Owens was sentenced to 35 years confinement, ordered to forfeit all pay, registered as a sex offender and dishonorably discharged.

(3) Air Force Office of Special Investigations examined video surveillance archives and determined that three victims had been sexually assaulted after Airman First Class Michael Lightsey used anesthesia to violate them. RESOLUTION: Lightsey was found guilty of one assault and sentenced to 30 months imprisonment, ordered to forfeit all pay, registered as a sex offender and dishonorably discharged.

IGGI’s new project will focus on accurate information collection and recommendations for the earlier apprehension of predators.

[i] Office of the Inspector General, U.S. Department of Defense, Semiannual Report to the Congress April 1, 2015 to September 30, 2015

[ii] Office of the Inspector General, U.S. Department of Defense, Semiannual Report to the Congress April 1, 2015 to September 30, 2015