“Trajectory of Asian American Nonpartisanship: Transitory, Transitional or End State?,” has been published online by Taylor and Francis in the journal New Political Science.

A full copy of the article is available here:
https://www.tandfonline.com/eprint/vjmhzGyuZymsg5ZGByHJ/full

“This analysis considers one of the central questions in political science, that is, stability in partisan affiliation or variation in the ‘unmoved mover.’ We first examine trends in partisan affiliation descriptively and we subsequently model predictors of shifts in partisan identification using logistic regression models. Large proportions of Asian Americans register as No Preference; in addition, over the eight-year span of the study, they demonstrate less malleability in switching from nonpartisanship than other groups” (Le and Ong 14). 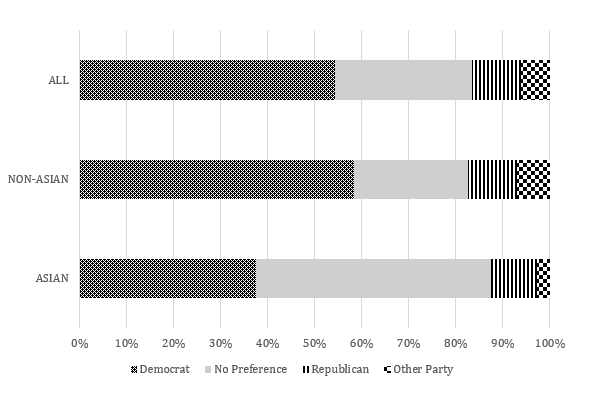 Figure 2 shows that by 2011, Asian nonpartisans (“No Preference”) are much less likely to switch from their 2004 category than non-Asians. Similar to the rate of nonpartisanship, the rate of switching is almost half that for Asian Americans nonpartisans in contrast to Whites. 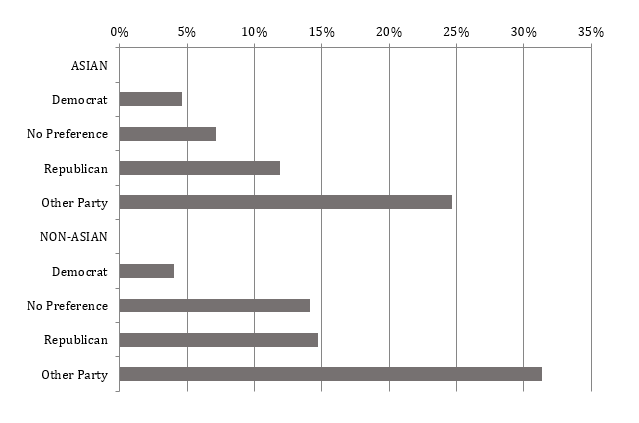 “This should be surprising to scholars in the classical assimilation school who assume that nonpartisans will be incorporated into the two-party system over time. It may be that No Preference affiliates will eventually adopt a political party—and perhaps the span of the study is too short to witness more subtle trends in that direction” (Le and Ong 14).

“This study therefore highlights that No Preference identifiers merit additional attention in the immigrant political incorporation literature and on the ground” (Le and Ong 15).

To cite this article: