WPSA 2015 talk “Freedom of Information in the Classroom” 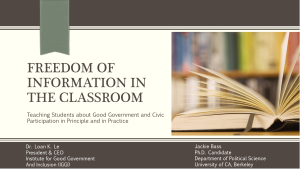 Dr. Loan Le (President & CEO, IGGI) and Jackie Bass (PhD Candidate, UC Berkeley) deliver their paper “Freedom of Information in the Classroom: Teaching Students about Good Government and Civic Participation in Principle and in Practice” at the Western Political Science Association’s annual meeting on April 4, 2015. A previous version of the manuscript was delivered at the American Political Science Association’s Teaching and Learning Conference in February of 2014. A draft of the manuscript is in revision and an update will be posted once it is published.

Abstract: This paper describes an upper division political psychology course that included public records requests as part of the formal coursework. One of our central goals as political scientists is to equip students with an understanding of and prudent tools to address issues of significant political controversy. Students represent the next generation of global thinkers and leaders who are unafraid to discard conventional thinking and civic complacency. In class, students learned in principle about what to expect from good government: democracy, transparency, the rule of law and respect for persons. Beyond voting, volunteering and staying current with politics, we believe that our students should gain experience in exercising their rights to an expansive set of government records that fall within the domain of “the people’s business.” As far as we know, this was one of the few political science courses to include public records requests (e.g. through the Freedom of Information Act and the California Public Records Act) as part of formal coursework assignments in an undergraduate class. Classroom discussions about the roots of “good” versus “evil” behavior – including the roles of government, the media and public opinion – in developments leading up to the Holocaust, the Los Angeles riots, and modern-day politics are consistently lively, instructive and provocative. Many students report that they are more interested in, knowledgeable about and attuned to politics, as well as critical of bias in information flows from media sources.