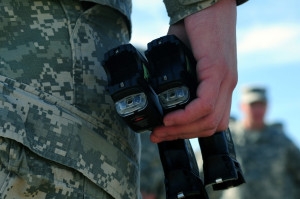 Dr. Loan Le (IGGI) and Maitria Moua (UCLA) complete manuscript for forthcoming publication: “Civilian Oversight and Developments in Less Lethal Technologies: Weighing Risks and Prioritizing Accountability in Domestic Law Enforcement.” A draft of the manuscript has been accepted for publication and an update will be posted once it is published.

Abstract: The controversial militarization of domestic law enforcement continues as law enforcement agencies that are best understood as serving the public and protecting public safety take on the training and equipment of our military, which focuses instead on information dominance, control and defeating enemy combatants in war. In recent years, reports have emerged that hundreds of thousands to millions of Americans are entered into terrorist “watchlist” databases by law enforcement and intelligence agencies with no public oversight, many documented mistakes and no real opportunity for challenging the listing[1]. The last few years have been rife with debate as knowledge emerged that the NSA has indeed collected data on millions of Americans while simultaneously denying that practice[2]. Finally, we know that the Pentagon granted almost half a billion dollars of military equipment to local law enforcement in 2013 through the Department of Defense (DoD) 1033 Program, which permits the transfer of excess supplies and equipment to local law enforcement agencies[3]. Faced with these large-scale shifts toward the militarization of our police agencies and a sea of bad information posted online, Americans interested in the civilian oversight of domestic law enforcement may not know where to obtain reliable information. This article underscores the need for enhanced civilian oversight of domestic law enforcement given rapidly evolving technologies that create tremendous new risks for undetected abuse. We conduct an analysis of available data on the existing implementation of conducted energy devices (CEDs) in order to highlight risks and potential challenges to ethical policing and civilian oversight with ongoing less lethal (or nonlethal[4]) weapons development and implementation. Going forward, as weapons and surveillance technologies continue to develop and are adopted by law enforcement agencies, civilians can implement public records requests to obtain systematic data in their domains of interest for the auditing and oversight of law enforcement practices. Enhanced and methodical oversight assists civilians and law enforcement officials with good police practices alike.